The Medicine Buddha Puja is held at least twice each month and is open to everyone. It is an especially good puja to perform on behalf of sick, dying or even deceased people.

Many eons ago, seven bodhisattvas strongly prayed for the temporal and ultimate happiness of all sentient beings, that their names become wish-fulfilling in order to heal both the mental and physical sicknesses and diseases of sentient beings. They vowed that their prayers will be actualised during these degenerate times when the teachings of Shakyamuni Buddha are in decline. When they became enlightened, one of the ten powers of a buddha is the power of prayer – that means that all the prayers that have been made get fulfilled. As the Buddha’s holy speech is irrevocable, you can wholly trust in their power to quickly grant blessings to help all sentient beings in these degenerate times. They are called the Seven Medicine Buddhas, the main one being “Lapis Buddha of Medicine, King of Light”. Buddha Shakyamuni taught the teachings on the Medicine Buddha, and according to one tradition, is also considered as one of the Medicine Buddhas, and hence the Eight Medicine Buddhas.

The seven Medicine Buddhas manifested in order to pacify the obstacles to the achievement of temporary happiness, liberation and the ultimate happiness of full enlightenment. They are powerful in healing diseases as well as for purification. The Medicine Buddha practice can be used to help purify those who have already died and liberate them from suffering. It is also very powerful in bringing about success, both temporary and ultimate.

Lama Zopa Rinpoche says, “It is very important that the elaborate Medicine Buddha puja with extensive offerings be done regularly. The offerings should be as extensive and as beautiful as possible, and done in order to benefit all sentient beings.” 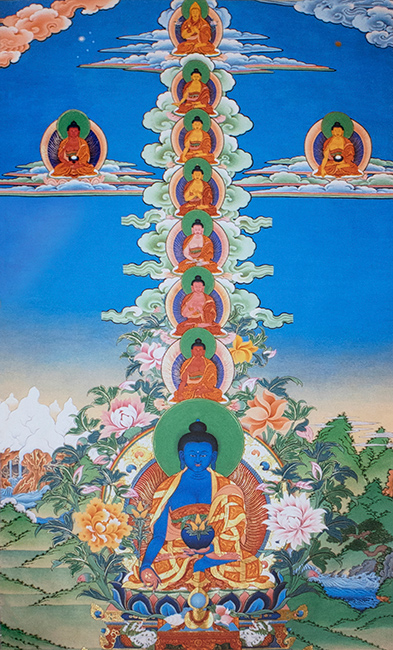