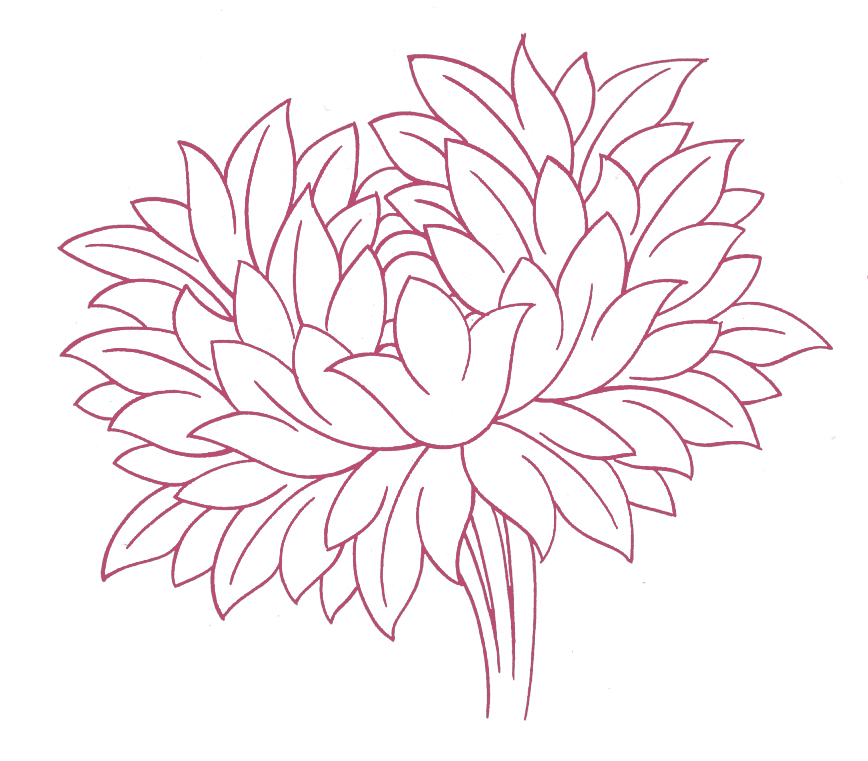 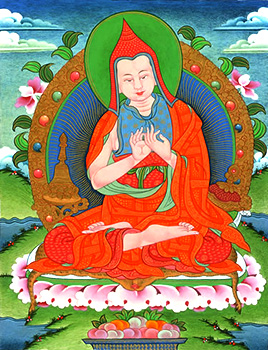 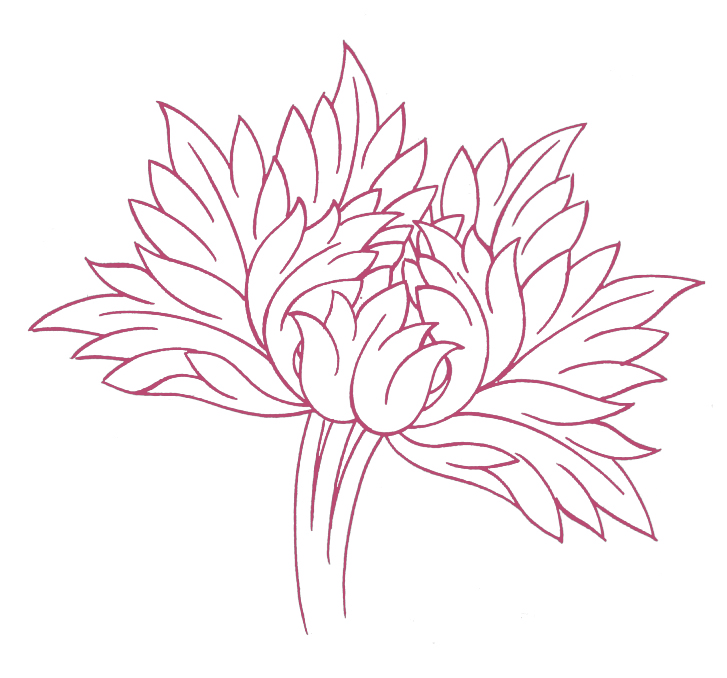 Atisha was born in the year 982 AD in East Bengal. He was born into a royal family and was given the name Chandragarbha, meaning “Moon Essence”. He was later given the name Atisha, meaning “peace,” by the Tibetan king Jangchhub Ö. It is said that at the time of his birth there were many auspicious signs, and that from his very early childhood Prince Chandragarbha displayed an unusually peaceful and compassionate nature, and an aspiration to spiritual practice.

The young prince also had a special connection with Tara, the female Buddha embodying all the Buddhas’ activities of great compassion. At the time when Atisha’s parents planned to arrange a marriage for him, Tara manifested to Atisha and counseled him not to be attached to his kingdom or worldly life in general. She advised the prince that he had a strong karmic potential to become a great spiritual teacher, as a result of meditation and practice in previous lives. Inspired by Tara’s words, Atisha formed the firm determination to practice Dharma and to attain enlightenment.

Atisha’s search for a master

The prince’s first step on the path to enlightenment was to find a spiritual master who would instruct him in meditation and the Buddhist teachings. He sought out a number of renowned Indian masters of his day such as the great teacher Jetari, who first gave him teachings on taking refuge and on bodhichitta; Bodhibhadra, who lived at the great monastery of Nalanda; Vidyakokila, known to have attained the perfect realization of the wisdom perceiving emptiness; Rahulagupta, known as the Black Mountain Yogi; and Avadhutipa, the great vajrayana master.

From India to Indonesia

At the age of twenty-nine, Atisha experienced a vision in which Rahulagupta appeared to him. The Black Mountain Yogi told him that it would be most beneficial for his practice and for the Dharma if he were to take ordination as a monk. Atisha had several more dreams in which his teachers and deities appeared and gave him similar advice. Following this direction, Atisha received ordination from the great master Silarakshita and was given the name Dipamkara Srijñana.

Studying under the renowned teacher Dharmarakshita, Atisha deepened his realizations of wisdom and compassion and was known for his pure ethical behavior. Still, he yearned to find the method that would bring him quickly and directly to enlightenment, and so, Atisha made pilgrimage to Bodhgaya. While circumambulating Bodhgaya’s great stupa, Atisha experienced a clear vision in which two manifestations of Tara appeared in the space before him. One asked the other: “What is the most important practice for achieving enlightenment?” The other replied: “The practice of bodhichitta, supported by loving kindness and great compassion is most important.” Thus, Atisha formed the single-minded aspiration to perfect his understanding and practice of the mind of enlightenment, or bodhichitta.

After checking thoroughly with a number of scholars and yogis Atisha learned that a high master called Suvarnadvipi (later known to Tibetans as Serlingpa) was reputed to have the most vast and profound realizations of bodhichitta. Suvarnadvipi lived on the distant island of Sumatra, in present day Indonesia. Atisha made the journey to Sumatra by boat with a group of traders. The voyage took more than 13 months and many difficulties arose along the way. Having reached the end of his long journey, Atisha first carefully investigated Suvarnadvipi’s qualities by closely questioning his friends and students. He then approached Suvarnadvipi to request teachings.

Suvarnadvipi agreed to provide the transmission of all the bodhichitta teachings held by him. He explained that Atisha should remain in Sumatra and practice these methods for 12 years, prophesying that if he did so he would attain perfect realization of bodhichitta.

His return to India

After 12 years, Atisha returned to India. He quickly became famous for the brilliance of his teachings, and his unparalleled abilities in debate, and was appointed abbot of Nalanda Monastery, the greatest of all Buddhist monasteries in India. However, while a golden age of Dharma reigned in India, in Tibet it was a very different story. Although the Buddhist teachings had been conveyed to Tibet two centuries earlier, there was great confusion about correct practice, especially about the way to correctly combine the practices of sutra and tantra.

The story of Yeshe Ö and Jangchhub Ö

The Tibetan king of that time, Lhalama Yeshe Ö, was a sincere Dharma practitioner. His strongest wish was to re-establish the pure lineage of teachings and rid Tibet of the great teachings
and rid Tibet of the great confusion that existed. Yeshe Ö therefore requested 21 of the brightest students in the country to travel to India. All but two of them died. On returning to Tibet they had an audience with their king. They said to Yeshe Ö: “In India there lives a monk of royal birth known as Dipamkara Srijñana. If you could persuade him to come to Tibet, it is certain that he would be of great benefit.” On merely hearing Dipamkara Srijñana’s name, Yeshe Ö was overcome by an unshakeable faith in him and his qualities. He resolved to do all in his power to bring the great teacher to Tibet.

It was the custom at the time to offer gold to teachers of the Dharma, as a sign of the student’s respect and aspiration for the teachings. Yeshe Ö therefore set about amassing a great treasure of gold to offer to Atisha. Yeshe Ö decided to travel himself with his followers to search for gold and was captured by Garlog Khan, the ruler of a neighboring kingdom. Yeshe Ö was thrown into prison. Yeshe Ö’s nephew, Jangchhub Ö, went to plead for his release. The Khan offered to release Yeshe Ö if Jangchhub Ö brought him the king’s weight in gold. After a great deal of difficulty, Jangchhub Ö managed to collect the weight of Yeshe Ö’s body in gold, excluding his head. The distraught Jangchhub Ö managed to find Yeshe Ö’s prison and speak to his uncle. Yeshe Ö said: “No, please do not give even a speck of gold to this evil Khan! …Please take the gold you have already collected and offer it to Dipamkara Srijñana. Please tell him of Tibet’s need for his help. Tell him that our need is so great that I have given up my own life in the hope that he will come to Tibet and teach the pure Dharma!”

The Tibetans plead with Atisha to travel to Tibet

Jangchhub Ö quickly set about arranging for a party to journey to India with the golden offering for Atisha and traveled, himself, with the party for much of the way. After many months the weary Tibetans arrived at Nalanda monastery. They were taken to meet Atisha in person by Gyatsoen Senge, a Tibetan lama who had lived in India for many years. They offered Atisha a world mandala one cubit high, richly decorated with gold. Gyatsoen Senge spoke of the confusion about Dharma in Tibet, of Yeshe Ö’s sacrifice and of the Bodhisattva Jangchhub Ö’s heartfelt request that Atisha come to their aid. Atisha was deeply moved by the obvious courage and sincerity of the Tibetans who had traveled so far to make this request.

Atisha carefully considered whether it would bring greater benefit if he traveled to Tibet rather than remaining in India. He consulted with Tara, who told him that by accepting the request to go to Tibet, Atisha would produce the greatest benefit for the Dharma teachings and sentient beings

When Atisha arrived, Jangchhub Ö rode to meet him and made special requests. “Compassionate Atisha,” he said, “there is great confusion about correct practice in Tibet. If it pleases you, I request you not to teach on the most profound subjects. Rather please teach about karma, the law of cause and effect. Please teach us those practices that are most easy to follow, and that include the essential meaning of all the Buddha’s teachings of sutra and tantra.” Jangchhub Ö also asked a number of questions about correct Dharma practice.

Atisha was greatly pleased by Jangchhub Ö’s sincerity and wisdom. In response, he composed the Lamp for the Path to Enlightenment. This text answered all the questions that had been put by Jangchhub Ö and, as requested, distilled all the Buddha’s eighty four thousand teachings of Dharma into a clear simple guide for practice. At the end of three years, Atisha arranged for a message to be sent to the Elder Ratnakarashanti at Nalanda requesting permission to stay in Tibet and enclosed a copy of The Lamp for the Path. The Elder Ratnakarashanti submitted The Lamp for the Path to his highest and most skilled pandits at Nalanda. They were astonished at how Atisha’s composition clearly and accurately condensed all the manifold teachings of sutra and tantra into a single short text. The great pandits recognized that Atisha would never have composed this work had he not traveled to Tibet. Ratnakarashanti therefore sent a message back to Atisha, consenting to his wish to remain in Tibet.

Atisha stayed in Tibet for 17 years in total. His clear and pure teachings initiated a golden age of Dharma in the Land of Snows. Through his foremost disciple Dromtönpa, Atisha gave the teachings of the stages to the path of enlightenment, known in Tibetan as lam- rim, which were passed down to subsequent generations, including to the great Je Tsongkhapa. Tsongkhapa’s lam-rim texts, following the structure and content of Atisha’s tradition, remain the cornerstone of Tibetan Buddhist teachings to this day. In the new millennium, Atisha’s clear and practical methods are taught in places as diverse as India, Europe, the US, and Australia. 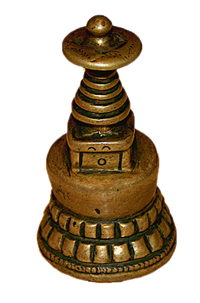